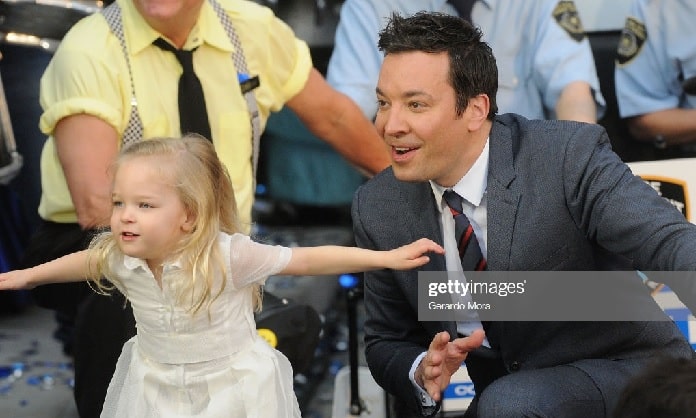 Winnie Rose Fallon is the firstborn child of a comedian, actor, producer, and host Jimmy Fallon and Nancy Juvonen who is an American Film Producer.

The name Winnie is a very unique name as it gives several meanings like fair one, white, happiness, pure, and soft. Let's find some more interesting things about Winnie Rose Fallon:

Winnie Is Learning To Ski

One of Fallon's favorite vacation spots has been Utan which is located in the United States. The Fallon family often goes to Utah as their daughter Winnie is learning how to Ski, make french fries, and pizzas slices in the Deer Valley Ski School. Fallon posted a picture of himself with his wife and two adorable daughters who were wearing matching ski outfits.

How Winnie Was Named?

The host of 'The Tonight Show Starring Jimmy Fallon' has named her daughter after the lake in New Hampshire 'Winnipesaukee' which was also the place where they enjoy their vacation and proposed to Nancy. Later they thought the name was way too long and weird to name their child.

Fallon then gave other reasons why the name was perfect for her as 'The Wonder Years' character Winnie was the coolest girl that he has encounter till now and lastly, he added that she is a 'Win' for both couples.

Fallon Acted Cool While Dropping Her To Kindergarten

Winnie Rose Fallon on his show told everyone that his daughter went kindergarten while discussing parenting with Jennifer Garner. He told that while Winnie was walking towards school it made him cry but he held it in like other dads because all dads were cool so he also had to act like one. While his wife Nancy can't hold it and cried and made all other moms cry.

After one year of Winnie's birth, Fallon and Nancy gave birth to their second child named Frances Cole Fallon who was born in 2014. Being the younger sibling of Winnie, she is loved by her sister and by her parents.

Winnie Was Born By Surrogacy

Fallon and Nancy were trying so hard for their first baby for a long time while trying several things. Then he finally revealed his emotional secret that Winnie was born through Surrogacy. At first, they wanted to keep it a secret from everybody but later decided to tell everyone.

Winnie comes from a well-reputed and rich family as her father Jimmy Fallon has a whopping net worth of $70 million which he earned form his several careers as actor, producer, host, and comedian. While her mother Nancy Juvonen has an estimated net worth of $ 20 million from her solo career as a film producer.

Fallon and Juvonen have been married for over thirteen years. The couple met each other in the set of Fever Pitch, then they starting dating after their second meeting where Fallon was invited in May 2007. After four months of being together, the couple finally decided to tie their knot on December 22, 2007.