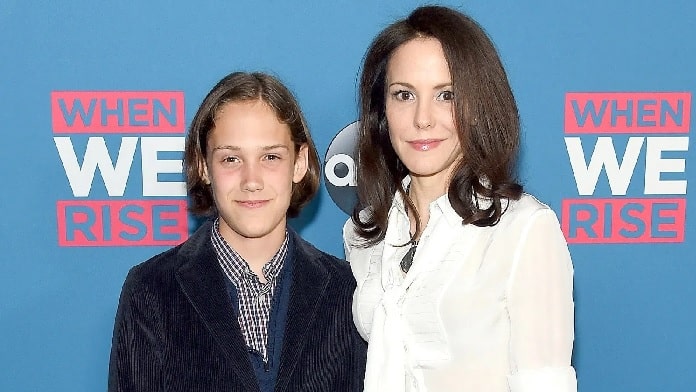 William Atticus Parker is the only child of William Gaither Crudup, professionally known as Billy Crudup with his then-girlfriend Mary-Louise Parker.

His father Crudup is an actor who currently plays Cory Ellison in The Morning Show. While his mother is also an American actress and writer Mary Parker.

The name William is an English name which means "Resolute protector; will". Atticus is an Old Roman nickname that means “man of Attica”. Let's find some more things about William Atticus Parker, here!

Parker is a fan of Ellen and loves 'The Ellen Degeneres Show'. As his father Crudup was on the show, he stated that he as well as his son is a fan of her and Atticus loves to watch her show.

When Crudup told his son William that he was going to be on Ellen show, William was really-really excited. Then Ellen jokingly said "oh, then why he is not here?" While Crudup added "He's in school, Ellen. His Schoolwork's important".

Their talk went on-and-on, and Ellen lastly said she can't wait to see Atticus and told Crudup to bring him next time he is on the show. 'Yes, I certainly will. He'll be thrilled to be here' said Crudup.

Made A Short Movie With Friend

As Atticus's parents both are in the same business, he is likely to take on professional acting as he reportedly took some acting class, while Crudup was recording his last season of The Morning Show.

During the class, Atticus and his friend Zevnad Cole made a seven-minute experimental film Parchment where he featured both his mom and dad as his cast members.

In September 2007, Parker adopted a baby girl from Ethiopia, ther the couple even gave the adopted daughter their family name and named her Caroline Aberash Parker.

She is an incredible mom and is happy about her adoption decision. Recently, Parker along with her son and daughter attended a party in Studio 54 New York, where we saw the star's daughter making her rare red carpet appearance.

Atticus parent's dated for over seven years from 1996 to November 2003. Parker then got pregnant with Crudup's son, William. When Parker was seven months pregnant with his baby, the pair stopped seeing each-other. A month later, Crudup stated another relationship with Claire Danes.

Then when William was born, Louise raised him alone with her other adopted daughter Aberash.

As for now, the ex-couple are on good terms and in 2019, Crudup and Atticus were seen together to support his mother while she was being honored at the 2019 International Women of Vision Awards.

Atticus comes from a wealthy and reputed family as his mother Mary-Louise Parker has a whopping net worth of $16 million from her career as an actress and writer.

She is widely known for her character Nancy Botwin in Weeds where she appeared in 102 episodes of the series.

Likewise, his father Crudup has an estimated net worth of $6 million earned as an actor. He has appeared in more than fifty movies but among them, his highest grossing movie is Mission: Impossible III. The movie was made on a budget of $150 million but collected a total amount of $398,479,497 from it's the worldwide collection.