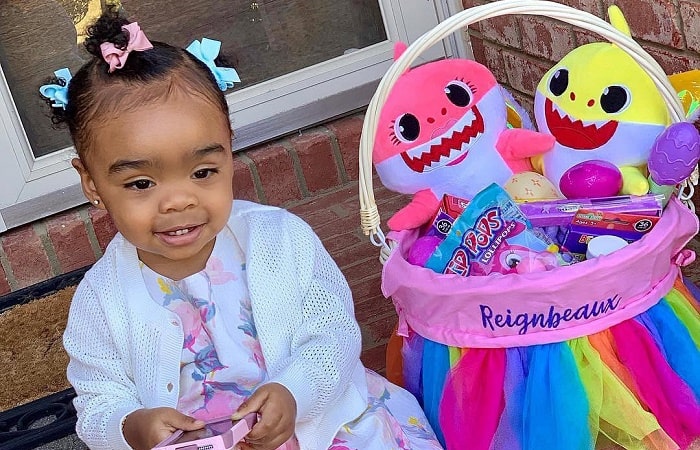 A daughter of the reality star and author Toya Carter aka Antonia Wright, Reign Ryan Rushing was born on Thursday, 8th Feb 2018 at 3:04 pm in the United States. Her father is a former athlete Robert Rushing aka Red. Her sun sign is Aquarius and belongs to black ethnicity/races.

Reign stands as a ruler and Ryan means “little king” or in Wright daughter case it means "little queen". Toya's revealed her daughter name on Instagram in January 2018, where Reign Ryan is a fully royal name signifying her to be the queen of a country. Her nickname is Reignbeaux, which is her Instagram name too.

Reign Ryan Rushing has an elder half-sister Reginae Carter from her mother Toya and her previous relationship. She has a very good relationship with her half-sister, where most of the time they have been spotted together. Stalking in Reign's Instagram, we can see they both are very happy in each other's company.

Reginae Carter is a daughter of Toya Carter and her former husband American rapper, Lil Wayne. She was born on 29 November 1998. She is a Hip hop and R&B artist also known as Baby Carter and a member of group OMG. She is also an actress and appeared in TV shows like Growing Up Hip Hop: Atlanta (2017) and Wendy: The Wendy Williams Show (2008).

Reign Ryan had a very grand birthday party with her family and friends. Her one-year-old birthday party was Reign Ryan fairyland theme, where everything in the party had her name including plates, cart. The cake was three tiers with rainbow and love at the top.

Reign Ryan was dressed like an angel, and her godfather is Jarrett Jack a basketball player was dressed as a shark, where she loves a shark most. She posted some of the pictures of her birthday celebration on her social sites, where everyone party was enjoying a lot.

Reign Ryan Rushing is fully active on social sites and has a 308k follower (as of May 2019) in her Instagram. She has such a huge fan following on social sites through the help for her parents' stardom.

Reign Ryan keeps posting pictures of herself with family and friends.

Reign Ryan Rushing, a little daughter of TV personality is a social media star and living a lavish life with her family. She owns a white Mercedes Benz SUV toy fit for her size, which cost around $10,000. She also owns another Mercedes Benz in Pink color and Range Rover on Black color.

Reign Ryan owns Bracelet with Reign writing on it from her first valentine. Even though she is too young, she keeps spending most of the time with her family outing. She was caught in The Wendy's Show Baby Spa Day. She was visited by singer Monica in February 2018. She is been doing a swimsuit photo shoot for Love is Props.