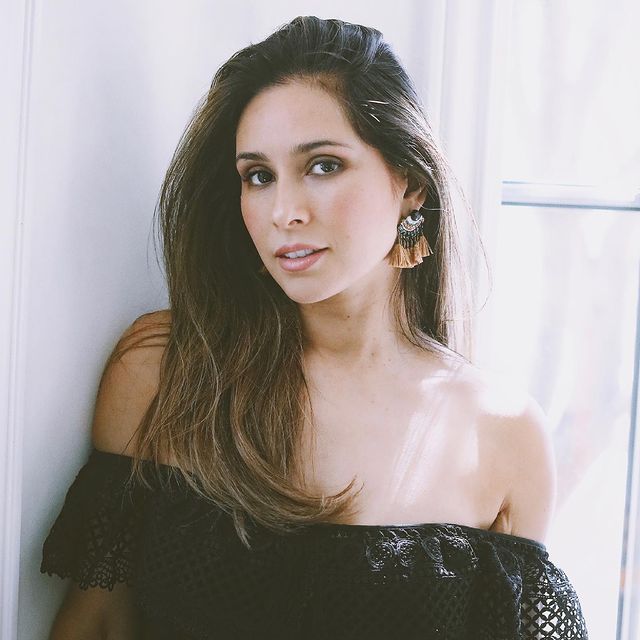 Patricia is perhaps most recognized for her roles in the Netflix series Real Rob which she also produced. Patricia is also an activist who speaks out against topics such as racism and inequality. She also worked tirelessly to assist individuals who had been impacted by the earthquake in Mexico in September 2017.

The actress with a Pisces zodiac sign has got a beautiful pair of brown eyes and dark brown hair. Her nationality is Mexican but is of mixed ethnicity.

Prior to their marriage, Patricia and Rob had a long dating history. They dated for literally 6 years and finally got engaged on the 23rd of April, 2011 in Beverly Hills, California.

Patricia is Rob Schneider's third wife, as he previously married London King and Helena Schneider. Despite the fact that Rob's prior marriages did not work out, Patricia Azarcoya Arce is a different story. Their conjugal life seems to be going very well despite the age gap of 25 years between Patricia and her husband.

Patricia Azarcoya in one of her interviews suggested that she comes from a low-income household.

She attended a local high school in Mexico, where she participated in numerous school plays which should be considered a foundation for her future acting career. Patricia then moved to the United States, where she received American citizenship.

This romantic couple has two lovely daughters named Miranda Scarlet Schneider who was born on November 16, 2012, and Madeline Robbie Schneider on September 14, 2016.

Similarly, she is also the stepmother of Elle King, son of Rob Schneider from his previous marriage.

Patricia Azarcoya Arce began her modeling career in Mexico and then eventually choose a career in television as a film actor and producer. In 2006 Patricia made her acting debut when she appeared in Alkahest. As of 2015, she began working on Real Rob, and in 2016, she was cast to play another small role in Fight or Flight. Planeta 5000 is one of her latest projects.

is best known for appearing in Real Rob, a Netflix series following the lives of Rob, Patricia, and their daughter. Fans highly praised her sense of humor.

Patricia is exceptionally active on her Instagram account with followers of more than 87.3K which goes with the user name @iampatriciamaya.

Maya is also a fantastic cook, with a self-titled YouTube channel where she posts her cooking videos. There are 2.42k subscribers. We can also find the  aesthetic and delicious-looking pictures of her home-cooked meals on her Instagram account.

According to numerous websites, her net worth is estimated to be over $3 million.

Follow our page Glamour Path to get more interesting updates on your favorite celebrities.