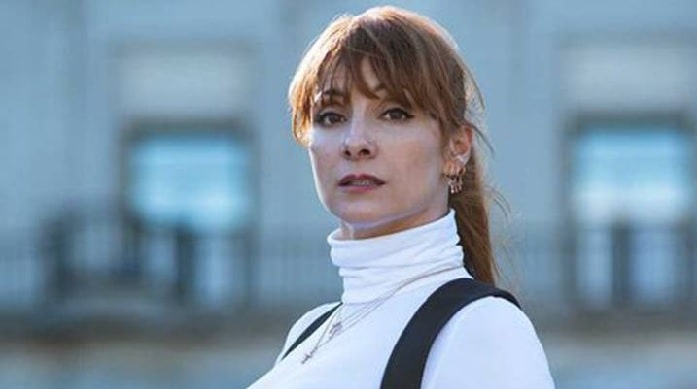 Najwa Nimri Urrutikoetxea who is professionally known as Najwa Nimri is a Spanish actress and singer. She is best known for her roles in movies and television series like Money Heist(La Casa De PapTeoel) as Alicia Sierra, Vis a vis(Locked Up) as Zulema, and Room in Rome.

Nimri was born on 14 February 14, 1972, in Pamplona, Navarra, Spain. She was born to Karam Nimri who was a Jordanian and to Navarrese mother. Here are some facts about Najwa Nimri:

What's her Net worth?

After her first debut in the movie Salto al vacío (1995) as Alex, she formed her own band in 1996 with a Spanish DJ and record producer, Carlos Jean. They named the band after the actress's first name and DJ's last name which is Najwajean. The talented actress is also a singer and composer whereas the band's first CD was 'No Blood'.

Najwa Nimri was married to Daniel Calparsoro who is a Director, Writer, and producer he was the one who directed Salto al vacío. The couple got married in 1995 after the release of the movie Salto al vacío. But unfortunately, things didn't work out between them and they got separated after five years of their marriage in 2000.

In 2004, the gorgeous actress gives birth to her first child and named him Teo Nabil. However, the father of Teo is not Nirmi's ex-husband 'Daniel' because he was born four years after the broken marriage of the couple. Teo is the son of Nurmi's partner Martìn.

The Open Your Eyes actress, has won the Jean Carment Award for the movie Salto al vacío (1995). She has won the other six awards while being nominated for fifteen different awards.

Nirmi has recently been a cast member of the Netflix television series, Money Heist in 2019. The series is a Spanish crime drama where a criminal mastermind executes a plan to lure the biggest heist in the recorded history. Nirmi plays the character of Alicia Sierra who is a pregnant inspector who is put in charge of the case of the robbery.

In 2019, she had done voice acting for a video game Call of Duty: Modern Warfare where she has voice acted as Kate Laswell. She has also posted a picture of

Najwa seems to love animals very much as she owns a grey colored Pitbull which she bought on August 1, 2017.

The Vis a Vis (Locked Up) actress has an amazing height of 5 feet 8 inches which is 172 cm and has maintained her weights over 57 kg which is 126 lbs. She has brown eye color and her hairstyle and hair color changes frequently from blond to red, black, brown and more.