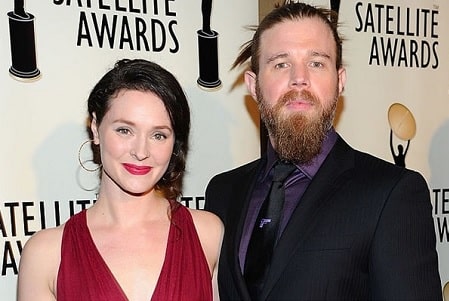 Molly Cookson is an actress and production manager, known for her roles in Shouting Secrets (2011), Chasing the Green (2009) and Outsiders (2016).

Cookson is married to American actor Ryan Hurst who is best known for his roles in Remember the Titans, The Ladykillers, and We Were Soldiers. Let's find some more interesting facts about Molly Cookson:

The Homesick actress has attended  Santa Monica High School and as she was interested in acting from her childhood she enrolled at the London Academy of Music and Dramatic Art. Then she joined Loyola Marymount University from where she graduated.

In April 2013,  Cookson bought a house worth $1.71 million with her husband Hurst in Woodland Hills, California which stands on 3,400 square-foot of land.

Cookson and Hurst met each other in 1994 and started dating since then. Being together for over eleven years the couple finally decided to tie their knot in 2005. The duo is now enjoying their happy married life together.

Ryan Hurst's wife first started her acting career in 2009 as Golf Pro Shop Cashier in Cashing the Green; She also worked as a production manager for the movie.

Then in 2011, she played the character of Annie in Shouting Secret and following the same year she appeared in a short movie named Homesick as Ann.

Six years after appearing in Shouting Secret, Cookson in 2017, played a television series named Outsiders as Eela Shay. Since then, she hasn't appeared in any movies.

Opened fast shoes with her husband

After marrying Hurst, they both opened a Fast Shoes production company where Hurst is the President, CEO, and Co-Founder of the production.

The Outsiders actress is the daughter-in-law of an American actor Rick Hurst and acting coach Candace Kaniecki. Rick was best known for his roles in 'The Karate Kid Part III', 'Steel Magnolias', 'Going Ape!', and 'Blue City'.

Whereas, Candace has her acting school named Candace Kaniecki (Herman) Acting School where she gives her acting lesson.

The Shouting Secrets has active on Facebook only as she hasn't posted anything since 2012. Then on June 5, 2011, her Facebook was hacked and posted a status saying 'I think I was hacked. So sorry if anyone got weird messages from me'.