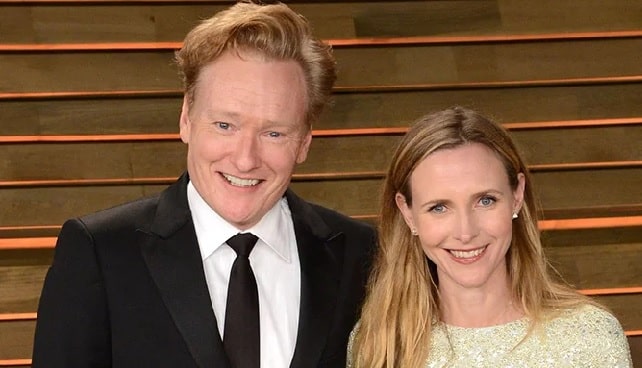 Liza Powel O'Brien whose birth name is Elizabeth Ann Powel has worked as a copywriter for advertisement agencies like Foote, Cone & Belding. She rose to fame after marrying television host Conan O'Brien.

Own a House Worth $19 million With Her Husband

O'Brien is a bachelor's degree holder from Vassar College. Then she enrolled at Columbia University from where she graduated in fine arts.

On January 12, 2002, Powel married Conan O'Brien who is the host of several television shows like Saturday Night Live, Late Night with Conan O'Brien, and The Tonight Show.

Conan first saw Powel while taping an episode of "Late Night with Conan O'Brien" in 2000, and for Conan it was love at first sight.

Moreover, the funny man Conan Brien has once said that one of the NBC vaults still has the footage of him falling for his wife.

From eighteen years of marriage, the couple have parented two adorable children.

Liza On October 14, 2003, gave birth to Conan's first child Neve O'Brien. Then in 2005, they parented a second child (this time a son) named Beckett O'Brien.

There is a saying that 'Behind every successful man there's a strong woman', well it has turned out to be true in Powel and O'Brien case.

In 2010, Conan faced several difficulties because of the pressure and frustrations that came from the industry.

At Conan's lowest point Powel supported her and engaged him by giving several household tasks like picking and dropping kids, volunteer in sports, and even cooking things at home.

O'Brien has been married in a prestigious family as she is the daughter-in-law of Thomas Francis O'Brien and Ruthe Reardon. Her father-in-law is a physician as her mother-in-law is a lawyer.

O'Brien is not active on social media as her husband is mostly active on Instagram with over 1.5 million followers.