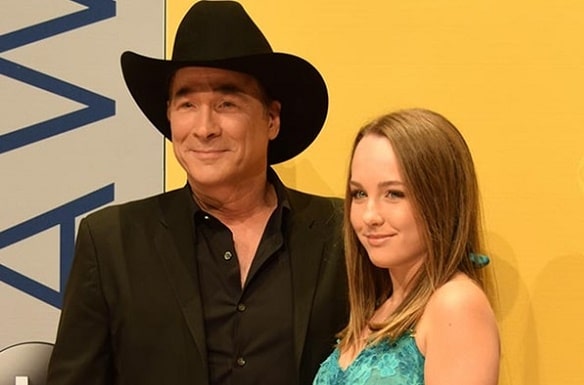 Black was born on May 8, 2001, in Laurel Canyon, Los Angeles, California. After one year of her birth, her parents moved to Nashville Tennessee. Let's find some interesting facts about Lily Pearl Black:

What Is Lily's Net Worth?

Black has an estimated net worth of $600 thousand which she has earned form her career as an actress and singer.

Black is from a reputed and wealthy family as she is the daughter of famous celebrity Lisa Hartman Black and Clint Black.

Black's mother Lisa Hartman Black, from her varied career as an actress and singer has earned an estimated net worth of $5 million.

While her father Clint Black has a whopping net worth of $25 million from his diverse career as a singer, actor, record producer, and songwriter.

Black has a half-sister named Chelsea Bain from her father's side. Sadly, Chelsea mother's name isn't revealed anywhere up until now!

Debut Single With Her Father

Clint and Lisa's only daughter has followed her parent's footsteps as she is a brilliant actress and singer. In 2018, Black made her first recording debut with her father Clint Black with a christmas single “Magical Christmas.”

Clint said in one interview that her daughter Lily is a gifted artist who loves to perform. He also said that Lily has devoted herself to developing her talents. He also added that she loves to sing, act, and dance as well but deep down he thinks that music will be her true strength.

Clint Wrote A Song For Her

When Lily was just a baby her father Clint Black wrote a song “Little Pearl and Lily’s Lullaby" for Lily. He still can't believe that he wrote it when Lily was a baby but now he can see her growing as a fine young woman who is ready to accomplish everything that she deserves in her life.

On October 29, 2019, Clint was honored with 'Music City Walk Of Fame' in Nashville, United States. The singer walked in the music city with his wife and daughter. He also posted a picture of himself carrying the star award while sitting down with Lisa and Lily.

On May 1, 2012, Black appeared in a family movie named Flicka: Country Pride as Nina with her parents Clint Black who played Toby and her mother Lisa Hartman Black who also acted alongside her husband and daughter as Lindy.

The movie is about Flicka and Toby who help her teenage daughter and stable owner who are struggling with their own life.

Black is not active on social media like her mother. While her father Clint Black is active on Instagram with over 102k followers.