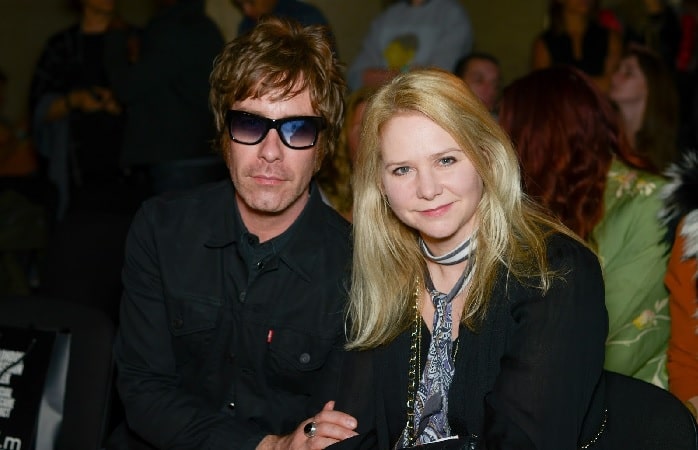 Lee Parkin Starkey is an English stylist, makeup artist, and a fledgling fashion designer. She is the daughter of Ringo Starr, from the all time famous band 'The Beatles' with his ex-wife Maureen Starkey Tigrett.

Starkey was born on November 11, 1970, in London at Queen Charlotte's and Chelsea Hospital. Let's find some more facts about Lee Parkin Starkey:

What Is Lee Starkey Net Worth?

Starkey has an estimated net worth of $3 million from her varied career as a stylist, makeup artist, and a fashion designer.

While Starkey was 16, she went to King Alfred's School in Hampstead  and even worked at Tower Records. Then she had an interest in acting so, Starkey enrolled in a drama school and again left the school after losing interest.

At last, she joined a makeup-school where she somehow got a diploma but at last, she didn't like it.

Starkey is in a relationship with Jay Mehler, a British rock band Kasabian guitarist since 2006. From their relationship, the couple gave birth to triplets.

After she hit it off with Jay Mehler, Starkey gave birth to triplets (two boys and one girl). They named their two boys Smokey and Jakamo and named their daughter Ruby Tiger.

Starkey has three siblings Zak Starkey, Jason Starkey, and August Tigrett, her oldest brother Zak was born on September 13, 1965, in London. He is a drummer in a famous rock band 'The Who' since 1996.

Zak is married to Sarah Menikides and has a child named Tatia Jayne Starkey born on September 7, 1985.

Then on August 19, 1967, her brother Jason Starkey was born in London. Jason is married to Flora Evans since 2010 and has two children Sonny Starkey and Louie Starkey.

Her youngest sister Augusta Tigrett was born on January 4, 1987, in Dallas, Texas.

Starkey is from a reputed family as she is the daughter of Ringo Starr, an actor, singer, and drummer of a rock band named The Beatles.

Similarly, her mother Maureen Starkey Tigrett is a hairdresser from Liverpool, England. The couple met each other while Tigrett was training to become a hairdresser in Liverpool.

Was Diagnosed With Brain Tumor

In 1995 of August, Starkey was rushed to the hospital in England after she collapsed and was diagnosed with a brain tumor.

Then for further treatments, she was admitted to the hospital in the United States. Luckily, the tumor was curable and after three weeks of her first operation, she went through a radiation treatment.

Again in 2010, her brain tumor returned again, but after treatments, she has been completely clean.

Was in a commercial with her father

As Starkey worked at Tower Records and A Hard Rock Cafe, which was owned by her step-father, Isaac Tigrett.

She also appeared in a car commercial with her father Ringo as a teenager as a punk with her hair dyed pink wearing a black dress.