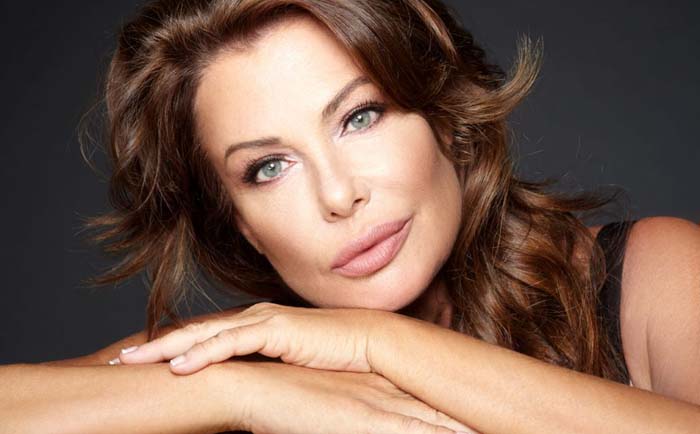 Kelly LeBrock is an English actress and model, who has been featured in numbers of top magazine cover including Vogue. She is very famous for her line “Don’t hate me because I’m beautiful” in a national TV commercial for Pantene.

LeBrock was born on born March 24, 1960, in New York City, the United States. She is the daughter of Harold Arthur LeBrock and Mary Cecilia Traynor. She has a mixed ethnicity of French–Canadian and Irish.

Kelly LeBrock has huge net worth of $2 million, which she made through her work in the entertainment industry. She is a model turn actress, who has appeared over 28 movies and TV shows.

She was part of the massive hit comedy romance movie The Woman in Red (1984) with $25.3 million worldwide gross.

LeBrock has been involved with numbers of global leading brands promoting their goods and products. She charges a high amount for her work with the companies as a prominent star. She is widely known for her appearance in Pantene shampoo commercial as the spokesperson.

LeBrock even walked in ramp for Christian Dior following her contract with a fashion label.

Kelley owns a lavish house in California's Santa Ynez Valley. She moved into the remote part of California to raise her children normally like other kids.

According to the report of Abc news, she still lives in a private ranch growing her own vegetables and riding horses.

Kelly LeBrock is living a joyful life with her husband Fred Steck and children. The duo had their wedding ceremony on July 2007 and has been in a strong relationship till present.

Past Relationship and Dating Affairs

LeBrock was married thrice, where the film producer and restaurant owner, Victor Drai is her first husband. The ex-couple tied the knot in 1984 and got divorced after two years of marriage in 1986.

After that, she moved with Steven Seagal, who is an American actor and martial artist. The former lovebird first met at the set of the movie and fall into love instantly.

The couple exchanged the vows in September 1987 and shares three children together. They separated in 1993 following "irreconcilable differences" and got the divorce finalized in 1996.

Kelly LeBrock is a mother of three children with her former spouse Steven Seagal; two daughters Arissa LeBrock and Annaliza Seagal, and a son Dominic Seagal.

Arissa is an Instagram star and model following steps of her mother. She is the youngest daughter of kelly, born on July 24, 1993.

LeBrock had a brother Harold LeBrock, who died of cancer in 2008.

After the death of Kelly LeBrock's father Harold Arthur Le Brock, Gene Wilder became her surrogate father. The two remain closed until the death of Wilder on August 29, 2016, from Alzheimer's disease.

Gene Wilder was an American actor and musician with hit movies like Young Frankenstein and Willy Wonka & the Chocolate Factory.

The 59-year-old Kelly LeBrock is the bombshell with a glamorous look with the sizzling hot figure of 34-23-36 inches of bust, waist, and hips respectively.

She is tall about 5 feet 8 inches (1.73 m) in height and weighs 59 kg. She has a stunning man heart taking blue eyes and astonishing long dark brown hair.

Kelley is a kind heart women, who like to give away some part of for income to charity works. She has been actively working as a spokesperson for a non-profit social organization Club Carson, which helps children suffering from cancer.

Kelly LeBrock earned huge amount of fame and fan base through her acting skill. Her excellent performance in numbers of hit movies and TV shows led her to won numbers of awards. She was honored as 'Female Star of Tomorrow' in 1985 ShoWest Convention, USA.