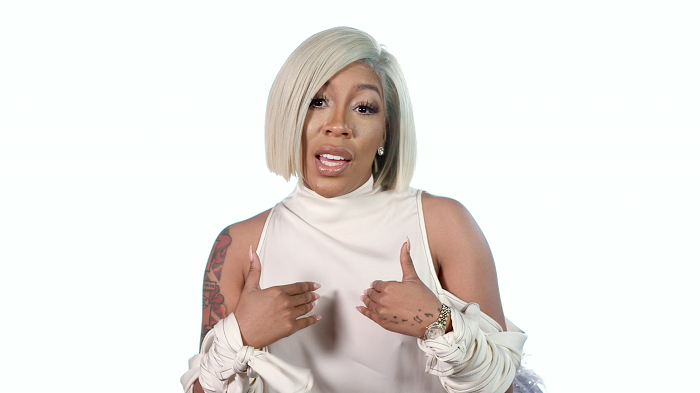 The former cast member of LAHH, K. Michelle‘s Net Worth is estimated to be $10 million. She has amassed her fortune from being a successful R&B singer and a TV personality.

The rapper whose real name is Kimberly Michelle Pate first mad her debut in the music industry in 2010. Her mixtape titled “What’s the 901?”  was a tribute to Mary J. Blige. K. Michelle’s debut album Rebellious Soul managed to be on top of the US Hot Billboard R&B/Hip-Hop Songs chart.

K. Michelle Net Worth and Earnings

The “Can’t Raise a Man” singer’s Net Worth is estimated at $10 million. As Michelle is a famous singer and now also a TV reality star, money is drowning in her bank account from all sides. K. Michelle was part of the Love & Hip Hop: Atlanta cast for three seasons. She was in the first and second season and then the fifth season of LAHH.

K’s fellow cast member Karlie Redd who has a net worth of $1 million takes home a grant sum of $50,000 per season. As we know Michelle is also a huge star so, K. Michelle’s salary from the LHHA must be grand. After that K. Michelle went on to be a part of Love & Hip Hop: Hollywood. But for some reason only after a season, she decided to quit.

Income and Earning From Music

Michelle released her first single " Fakin it" which made to the charts of record level"Jive Record".The single was made in collaboration with Missy Elliot who is known as queen of hip hop.Most of the girls find her as a role model, so it was a big deal for K.Michelle to work with her idol.

To till date, the talented K. Michelle has released many albums under her name. Here are some of her albums along with their respective price, More Issues Than Vogue ($12.99), Anybody Wanna Buy A Heart? ($7.99) and Rebellious Soul ($9.99)

K’s album has sold over half million in copies, and she has earned over $1 million from that.The TV star Michelle also started her own show K. Michelle: My Life, which focused on her music career and life with family and friends. No wonder K.Michelle’s net worth is estimated at $10 million.

Along with that K does shows and performs in tours in different places. She must charge a substantial amount of money for that. The chunk of money collected from that also contributes to her riches.

K.Michelle is all about her business. After opening her Puff & Petals restaurant in Atlanta in May 2017, the Memphis native is now tapping into the home decor industry.She recently announced on Instagram that her new “home goods/lifestyle  brand” will launch very soon.

In her post, she teased a custom bed — that looks very comfortable — is one product from her upcoming collection. It will be available in pink, black and forest green.

For the marijuana enthusiasts, K. has a cookbook dedicated to you which she has wrote on her Instagram.

“For years now edibles have been my thing, now I really have no choice because after 6 surgeries my body is still healing and I have pains,”

“I now cook with marijuana, shower with it, and use massage oils every day with it. It’s a lifestyle.”

With a decent net worth like hers, it isn’t difficult to bear the cost of a fantasy house. K. Michelle purchased an extravagance land in 2014. It’s situated in Los Angeles, California and obviously it sits on a noticeable part high on the slope.

The famous artist has beautiful view from her new house. Her greenery enclosure has palm trees and pleasant swimming pool.

She is also the first African – American woman to collaborate and become the face of Jack Daniels.K. Michelle is one of the top most singer personality and a millionaire businesswoman.

The LHHA star K. Michelle also owns a luxurious Rolls Royce Wraith which is worth $300,000.