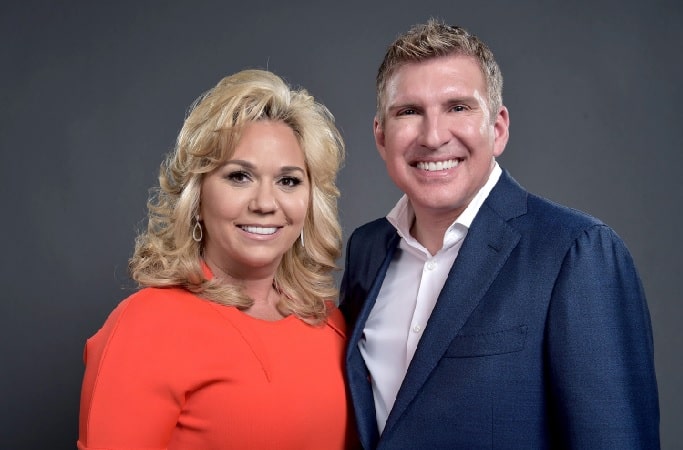 Julie Chrisley is a television personality who is best known for her works in Chrisley Knows Best, What's Cooking with Julie Chrisley, and Hollywood Medium. She is the wife of Todd Chrisley who is an actor and producer.

Chrisley has an estimated net worth of $3 million by being a television personality where she gets an annual salary of $260,000.

The Chrisley Knows Best actress has married Todd Chrisley who is an actor and producer who is best known for his roles in Sharknado 4: The 4th Awakens (2016), Growing Up Chrisley (2019) and Chrisley Knows Best (2014). The couple got married on 25 May 1996 and are blessed with three children.

Julie Chrisley first gave birth to Chase Chrisley on June 1, 1996, who is an actor best known for his works in Chrisley Knows best, Growing Up Chrisley, and The RAW. Then on August 11, 1997, in Atlanta, Georgia, United States their second daughter Savannah Chrisley was born. She is also an actress who has appeared in Sharknado 4: The 4th Awakens, Royal Pains, and Chrisley Knows Best.

In 2006, their third child was born whom they named Grayson Chrisley, who has appeared in the reality show Chrisley Knows Best, Sharknado 4, and Big Star Little Star. From Todd's previous marriage, he has two children.

Chrisley had a brother named Harvey Hughes III who committed suicide when he was 25 years old.

She Is Not Todd's First Wife

Then on August 29, 1991, they gave birth to their second child named Kyle Chrisley.

In 2012, Chrisley was diagnosed with Breast Cancer for which she had to went under double mastectomy on March 22. She told in one interview that Todd saved her life cause he forced her to take a medical test which later resulted in breast cancer. After the successful surgery, Chrisley got rid of cancer and now is living her happy life with her husband.

Julie and Todd were indicted on committing bank frauds, wire frauds, and tax evasion charges by a Georgia grand jury. Later, Todd posted a lengthy caption on his Instagram by stating they have been framed by their trusted ex-employee while he was seeking revenge on them for firing him earlier.