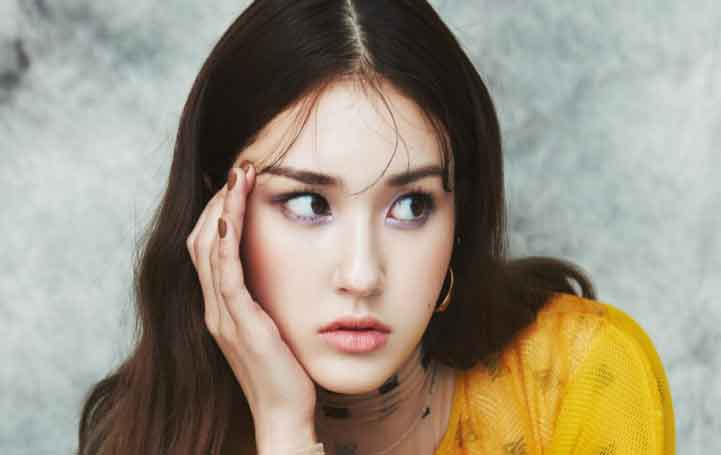 Enik Somi Douma, known by her Korean name Jeon So Mi (전소미) and stage name SOMI is a Canadian-Korean singer. She was born on March 9, 2001 to a Dutch-Canadian father and South Korean mother.

Somi is the former member of the girl group I.O.I, Unnies and Girls Next Door. She is a pop singer, composer and a songwriter under the agency "The Black Label".

The singer was born in Canada but was moved to South Korea together with her parents when she was one years old. She has a liitle sister named Evelyn.

Childhood life was a bit tough for as she made no friends due to her non-native face. She wanted to have plastic surgey to look like a Korean and fit among her native friends.

The Korean-Canadian singer joined JYP entertainment in 2014. After one year of joining her agency she participated in the survival show "Sixteen" but was eliminated ranking 9th among all the participants.

In the year 2016, Somi participated in yet another survival show "Produce 101". She joined as a trainee representing her agency JYP Entertainment. In this reality show she was able to rank number one among the 101 trainess.

She was the center of the group formed from the survival show "I.O.I'. Her first debut was with the members of I.O.I.

The girl group I.O.I was disbanded in 2017 and everybody parted ways to different paths. Somi signed a official contract with JYP after the disbandment.

She joined a variety show called "Sister's Slam Dunk" and debuted from yet another girl group Unnies.

The singer joined yet another reality-variety show "Idol Drama Operation Team" representing her girl group I.O.I. She later on the show became member of a special girl group "Girl's Next Door".

In 2018, Somi left JYP Entertainment and joined YG Entertainment's sub label "The Black Label". She was preparing per her solo debut but the release of her song kept postponing due to internal reasons.

Somi debuted after a long wait as a soloist in 2019 with the song "Birthday". The song was meant for the celebration of her birth as a solo artist.

Somi made a comeback with the song "What you Waiting For".

Somi was involved with I.O.I in year 2021 for their reunion for their fifth anniversary. she aslo released yet another singe "Dumb Dumb".

Jeon So Mi has a net worth of approximately $1.5 million.

Somi is not involved in any romantic relationship as of 2021 also there are no records of her past relationships.

Some Facts and TMI

Her nickname is "Vitamin" and "Maknae On Top".

She also looks up to Bigband, Got7 and 2NE1.

She was selected as the new host for SBS MTV's "The Show" along with UP10TION's Woo-shin.

She dreamed of becoming a stewardess as a child.

She was supposed to debut with the members of "ITZY" but was replaces with current member Yuna as she departed from JYP Entertainment.

She is a model for Reebok.

She appeared in Got7's music video "Stop Stop It".