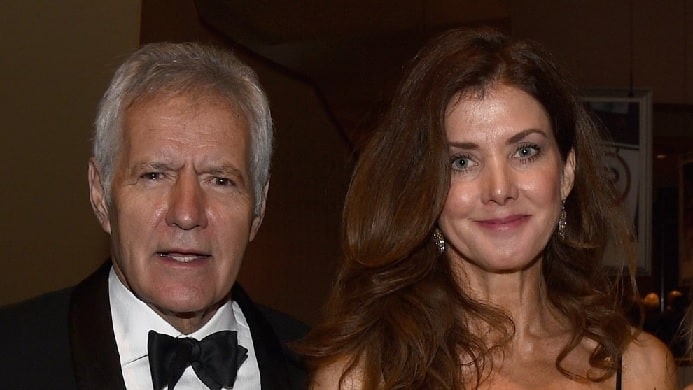 Jean Currivan Trebek is a businesswoman who gradually came to fame after marrying Alex Trebek, who is a Canadian-American television personality.

Trebek was born in 1963, in Huntington, New York. She is the Member of the Church of Religious Science. Let's find some more interesting facts about Jean Currivan Trebek:

As Trebek was born and raised in NewYork, she enrolled in Harborfields High School while in 1982, she graduated from some university in NewYork.

Trebek is married to Alex Trebek who is the host of a game show named Jeopardy, on 30 April 1990 in L.A's Regency Club in front of 150 guests including friends and family. The couple has been married for over two decades and are blessed with two children from their thirty years of marriage.

The happily married couple have a huge age difference as when Trebrek met Currivan, he was 49 while she was only 24 years old. The couple has age a difference of 25 years, and the difference was the major source of tension for Trebrek but at last, that didn't stop them and now they are still living their happy married life.

Husband Proposed in a romantic Way

Trebek's husband is quite a romantic man as he proposed her in a very impressive way that no one can imagine. On Jean's 26th birthday, Alex invited her to dinner and gifted her a velvet black pant with a bolero jacket. Then after all the present, Alex gave her a finely knitted wicker basket and while opening it Jean saw a 16-carat sapphire ring that was laced with diamond.

She is not Alex's first wife

Despite the duo have been married for over two decades, Jane is not Alex's first wife. He was married to Elaine Kares Trebek who is an actress and has appeared in The Bunny Years and Canada A.M. The ex-partner got married on 25 September 1974 and after eight years on 13 May 1982, they parted their ways.

Member of the Church of Religious Science

Currivan is a member of the North Hollywood Church of Religious Science and takes her belief very seriously. As she takes regular part in her weekly services of church Jane was Currivan was once listed as a practitioner on the church's website. Most of her church friends are part of her social life.

Currivan is the real estate manager of her son's restaurant as she helped him to open the restaurant in New York in 2016. Currivan and Trebrek bought a building that cost $1.92 million at 140th Street in Frederick Douglass Boulevard for their son to open a Mexican restaurant.

Shy in front of camera

Currivan stands 5 feet 8 inches tall (173 cm) while weighing around 60 kg. As she has maintained her body perfectly as 36-28-37 inches and has ocean blue eyes with brown hair.