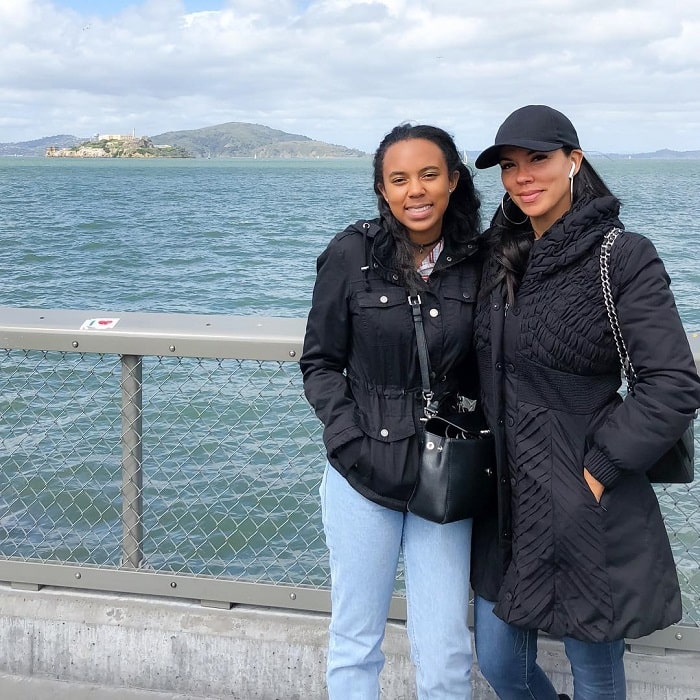 Her father Lawrence is an American stand-up comedian, actor, producer, talk show host, and writer while her mother Gibbs is a professional chef, entrepreneur, reality TV star and former musician. She was born on November 7, 2000.

The name Iyanna means "God is gracious" and is mostly given to American girls. Whereas Faith means "trust" or "belief". Let's find some more things about Iyanna Faith Lawrence:

Faith has enrolled in Sarah Lawrence College as her mother and father seemed so proud at that moment. Gibbs stated in her Gram that the day she went to college was the hardest days of her life as he left Faith in the college to start her new chapter of College Life.

Blessed With One Sibling and One Half-Sister

Faith has one younger sister named Amara Trinity Lawrence who was born on August 20, 2002. She is more interested in singling as she has recorded some of her covers and released it on SoundCloud.

Trinity taught herself guitar instead of taking a lesson and is mostly sings songs to her mother. Lawrence is a proud mother as she sees her Trinity grow to be a fine and talented girl.

She is a model and actress following her father's footsteps as her dream was to act in a film with her father. She has appeared in a short movie Godless Men and will be appearing in a cameo role in Bad Boys 4 Life.

Faith parent's Lawrence and Gibbs tied their knot on 10 July 2010, after dating for over fifteen years. The ex-pair married at Lawrence's Beverly Hills home in front of 120 guests that included actor Denzel Washington and fellow comedian Eddie Murphy.

Their marriage lasted for over two years and the pair decided to end their 17 years long relation on 25 April 2012. Even after the divorce, the ex-couple have remained friends as they visit each other for the sake of their children.

Before marrying Gibbs, Lawrence was married to Patricia Southall, an American founder and spokesperson of Treasure You.

They got married on 7 January 1995, while their marriage lasted for over one year and they got separated on 17 September 1996.

From their marriage, they have one daughter named Jasmine and have maintained a good relationship between them even after their separation.

As for now, Lawrence is planning his third marriage as he got engaged to Roberta Moradfar. She is the CEO of EFFACÈ Aesthetics and Expert Nurse Injector. Lawrence proposed Moradfar in April 2017, with a 5-carat emerald ring which was reportedly bought for over $500,000.

Faith comes from a wealthy and reputed family as she is the daughter of Martin who has a massive net worth of $110 million from his varied career.

He has appeared in more than forty movies, television series, and short movies. Whereas her mother Gibbs has an estimated net worth $5 million from her career as a professional chef, entrepreneur, reality TV star and former musician.