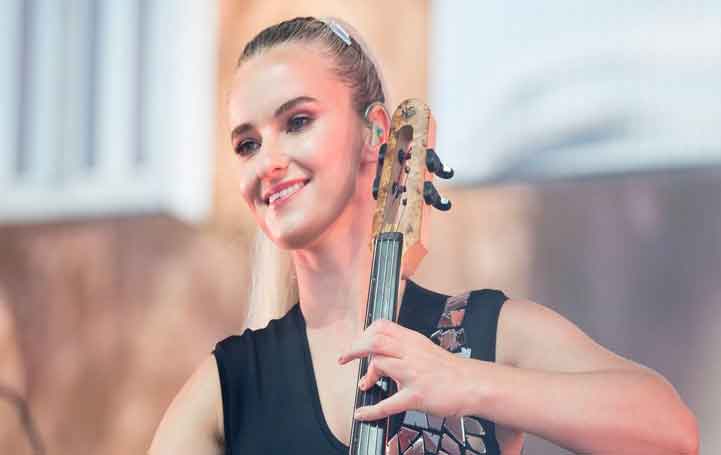 Grace Chatto is a cellist of the popular electronic music band Clean Bandit with other two brothers Luke and Jack Patterson. She is both talented in vocals as well as instruments and appears as the frontwoman for the band.

Grace along with her bandmates has collaborated with many famous artists like Jess Glynne, Anne Marie, Sean Paul, Zara Larsson, Demi Lovato, and Louisa Jonhson.

Grace was born on 10th December 1985 in London, England. Her father and mother are Ricky and Ruth Chatto respectively. She attended Latymer School and Westminister School. She after that got enrolled at the Royal Academy of Music and Jesus College at the University Of Cambridge.

The first meeting with her current bandmates Luke and Jack and former bandmate Neil Smith was at the University of Cambridge. After their meeting, they decided to form the band. The band was formed in 2008.

The cellist Grace Chatto has an amazing net worth of $10 million. She made most of her fortunes through her successful career as a frontwoman and cellist for the brand.

She has also appeared for various magazine shoots. She is also seen appearing in various events. She along with her bandmates have done numerous tours and concerts in their country as well as overseas.

The first success came to the band when they collaborated with Jess Glynne for the song "Rather Be" which topped the chart and earned global recognition. They continued to produce various beautiful albums which always managed to top the charts. With such huge success, Grace Chatto was able to earn her wealth and is living a luxurious life thanks to all that hard earnings.

Who Did Chatto Date?

Grace Chatto was once in a relationship with her current band member Jack Patterson, the drummer of the band. The two of them met each other during the time they were attending Jesus College.

Jack was majoring in architecture at the time. When Jack was in a relationship with Chatto he would tag along with her to their gigs and started to record their performances and designed fliers.

Jack's interest in architecture slowly and gradually started to fade away and he decided not to graduate. He moved t Moscow along with grace when she graduated and he was able to get the degree in cinematography.

Along with the release of the band's fourth album the relationship between Grace and Jack came to an end in 2016.

Kicked Out Of The School

Grace Chatto was kicked out of the school where she used to teach cello to the students. This happened when she shot a music video for the band almost naked which was not liked by the parents.

The parents pressured the school to kick out Chatto as they didn't want their children under the bad influence of their teacher.

Do visit Glamour Path for more info on your other fav personalities!