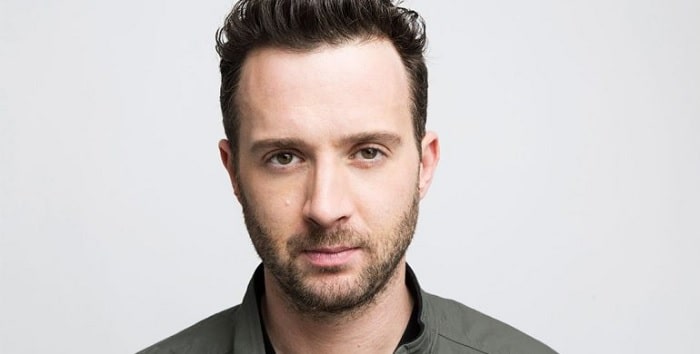 Eddie Kaye Thomas is an American actor and stage performer best known for his roles in American Pie (1999), Freedy Got Fingered (2001), and Stolen Summer (2002).

Thomas was born on October 31, 1980, in Staten Island, New York, the U.S. Here are some more interesting facts about Thomas:

What is Eddie Kaye Thomas's Net Worth?

Thomas has an estimated net worth of $7 million from his solo career as an actor. He also has earned his worth from being in commercial and by appearing as a guest star in many television series. He has gained $600,000 as a salary for his movie American Reunion.

The American Pie actor was enrolled in Professional Children's High School which is located in New York and then graduated from the school from where he became an expert on the Broadway stage.

Thomas has previously dated Ari Graynor, who is an American actress best known for her roles in Nick and Norah's Infinite Playlist (2008), Whip It (2009) and What's Your Number? (2011). The duo started dating in 2008 but things didn't work out between them and ended their relationship.

Stage Performance At The Age of Seven

At the age of seven, Thomas was in a stage performance from where his acting career began to rise. Then when he was twelve, in 1992, he appeared in the Four Baboons Adoring the Sun and in The Diary of Anne Frank in 1997 with Natalie Portman.

The Stolen Summer actor has appeared in a commercial video for Blockbuster LLC company which used to shows home movies and video games. Not only for the company, Thomas has done a commercial for branded Footwear manufacturing company, Nike and also for Snickers.

In 2000, Thomas won a Young Hollywood Award for Best Ensemble Cast from the movie American Pie which was shared by other cast members of the movie.

Thomas rose to fame after playing the character of Paul Finch in the movie American Pie(1999). He has also appeared in the sequel of the movie in American Pie 2 (2001), American Wedding (2003), and American Reunion (2012)

Eddie Kaye Thomas has given his voice to a fictional character Barry Robinson in Family Guy. He also has done voice acting in the television series American Dad as Barry Robinson/Barry / Manny from 2005 to 2019 in 85 episodes of the series.

His movie American Pie Was His Highest-Grossed Movie

Thomas has appeared in almost fifty-nine movies and television series and among those movies, his highest-grossed movie is American Pie. The movie was made on a budget of $11 million while it was able to gather $235,483,004 from its worldwide collection.

The First breakthrough in the Show Are You Afraid of the Dark?

Kaye was the Nickelodeon child actor who has played the character of Matt Dorney in Are You Afraid of the Dark? The series was about the teenagers who share the horror stories while sitting beside the campfire. Thomas was fourteen years old when he appeared in the show.

Eddie Kaye Thomas is not active on Instagram and Twitter as he tends to keep his life private away from media. All his fans are curious about his personal life, however, he has somehow managed to keep his life secret.