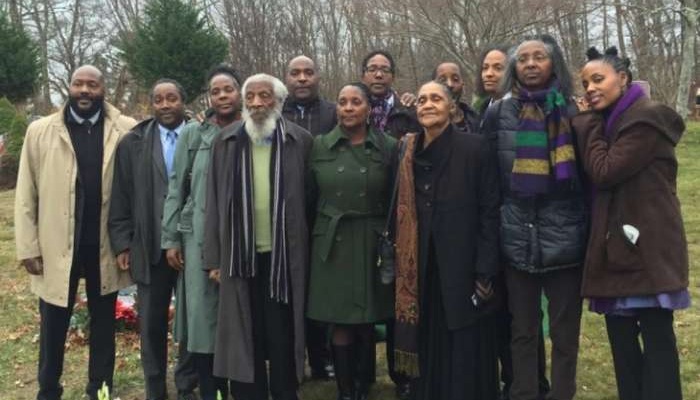 Dick Gregory's legacy is so great that everyone in modern America should thank him, for an African-American president. He saw the day and fought for the equality of black men. But do his children respect the actor, comedian, writer, and activist dad's legacy, and are they willing to carry it on?

Well, on that note, let's know Dick Gregor's all children, who literally grew up without Dick who was out there leading the African-equal right movement. So, here we have details about Dick Gregory's children, let's start it from the beginning!

The first child always has an interesting story to share, right? Well, Greg-Gregory or Gregory Gregory connived when his parents were having an affair. As Dick's mother gave birth to him after his father left, and his mother wanted Dick to be the last child to be born without a father, he married Richard Jr.'s mom Lillian, when she was pregnant with Richard.

Why did Dick's oldest son, who is now in his 50s have only one name? His name also has a funny story behind it! As Dick was afraid that his son would have to fight the Vietnam war, he tried hiding his record with a confusing single name "Gregory". Wise right?

Called as Greg by his friends, he was always on the road with his father and knows a lot of stories on Greg. He is possibly the only child who spent a longer duration with Richard.

Yohance Gregory is late comedian Dick's son who played his father's role in 2014's independent biopic Unsung Hollywood. He reportedly loved and respected his dad so much and always knew his dad was a man of great honor. Though he was always on the road, or either on TV up against the suppressive government of America, he always took care of his family financially.

He developed a deeper understanding of his father's life when he did the 2014's movie. He used to appear on Dick's shows and events and has several photographs taken with his late father.

Dick is often criticized for being an absent father, when asked about it, in Boston global Gregory replied

So, Michele Gregory is a professor at Washington University. She is also an activist just like her father and respects him a great deal, but yes! He wasn't actually there for his kids, growing up! Children often get miss led without a father figure around but Michele did turn out to be a well-educated woman.

Not everyone likes to live a life surrounded by the media, right? This might actually be true for Richard's 4th child and his 2nd daughter Lynne Gregory's life. She is not available in the media and nothing about her profession, has even surfaced as of yet!

Like Lynn, Pamela Gregory also is a shy individual reluctant to share her information on social media and has stayed out of the limelight. We don't know how was her relationship with her deceased father and how is she doing right now, the daughter of the all-time best selling memoir 'Nigger', has lived a low key life so far.

Paula Gregory  is the 5th child of the late stand-up comedian and occasional actor Dick. She reportedly is working as a licensed medical doctor now. Likewise, she shared a great deal of respect towards her late father and known his contributions to American politics has been monumental. She is also a humanitarian and has worked in raising funds for backward groups in America as well. So, we can say that she surely is taking her father's legacy further.

Growing up, Stephanie Gregory always knew that she represented the bloodline of the all-time famous influences against racial difference. Along with a historic comedian Richard, but she alike her most sisters has chosen to stay away from the razzle-dazzle of fame. She's been away from the limelight for a while now. Likewise, we don't collectively know-how was her relationship with her deceased father either.

However, we know like her sister Miss, she has now changed her name to Zenobia. Like most of her family, she is an open supporter of her father and values her father's ideology.

Christian Gregory is still representing his father's beliefs, and one of the best known and strongest Dick Gregory analyst. He works as Writer and producer in Hollywood and represented the suppressed Afro-American's voice.

He is necessarily an equalist, not a supremacist. He worked with his brother Yohance to bring back his legendary father's persona to life, which was a proud moment in Dick's life. Dick was fortunate enough to see his life depicted by his own son and to add the cherry on the icing, his other son was producing the biopic.

Christian, was the one to disclose that his father's memoir still brings in a huge revenue in the royalty of his father's book sales and the whole idea of him directing his father's biopic was to let the world know that heroes aren't born, in order to make the society better, you've got to be the one yourself.

Dick named him Christian so that white people would understand that God isn't a property of one community, he is universal.

Miss Gregory is the sixth daughter of the late comedian Richard, there's an interesting story behind Miss's name as well. Miss (period) that was her name which looks like a pronoun, right?

Why did Dick name his daughter that? As per Greg AKA Gregory, the eldest of Dick's son, his father named her Miss so that white people would have to call her Miss, no matter what! Growing up as a colored child wasn't as easy back then. Now, there are a very few people who are racist behind the closed doors, back then it was suppressive. The whole system would be against you, just because you look a certain way and represent the certain community, hence Dick named her Miss. As per Greg, miss was also in the process of changing her name legally.

Dick Gregory's youngest child Ayanna Gregory is a soul musician. She has taken her father's route and is an activist, singer, and anchor. She is willing to speak against injustice, live and die for her artistic values and people can't get enough of her.

She hails her legacy in dashiki, afro-curls, and sings the glories songs about her father. She is really inspiring people and thinks what her father started way back in the 1960s have led America to where it is now, here's another song from Dick's daughter, which will make us feel powerful.

So, these were all 11 Dick Gregory children who are still carying Dick's Legacy forward, keep up with Glamour path on biographies of more influential people from all around the globe.