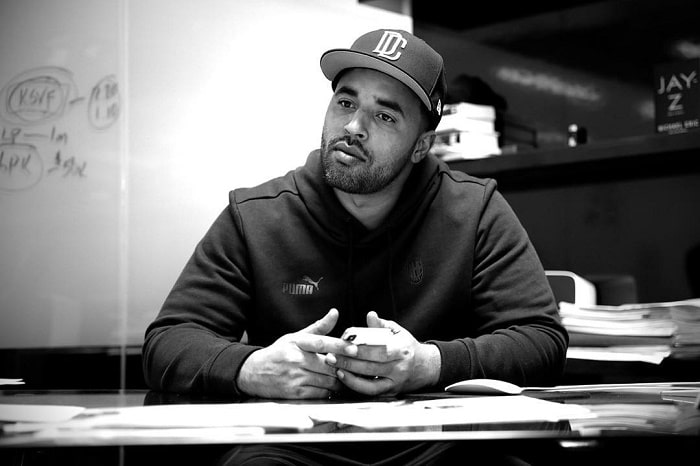 Smith was born on May 5, 1983, in Houston, Texas and his zodiac is Taurus. Swipe down to know more facts about Daniel Smith:

What Is Smith's Net Worth?

Smith has an estimated net worth of $700 thousand from his career as an American football player and also earned as Jay Z's talent manager.

Smith during his high school days, he was the teammate of Tennessee Titans quarterback Vince Young. Later he played football for the University of Idaho.

Got Engaged With Karla Anisa Karim

After his first failed marriage with Knowles, Smith moved on in his life and got engaged to Karla Anisa Karim. She is active on Instagram with over 25.4k followers and goes by the username "ZimKarim".

Smith has three children from his different relationships and with his ex-wife. His first son's name is Daniel Julez J. Smith Jr. aka Julez Smith with his first wife Solange Piaget Knowles.

Then on May 22, 2009, his daughter Saniya Smith was born in the United States.

Likewise, on April 20, 2016, the youngest member of the the Smith family , Legend Smith was born. Soon in 2020, Smith is expecting another child with Karla Anisa Karim.

Smith and Knowles were high school lovers as they dated each other for several years and decided to tie their knot on February 27, 2004, in The Bahamas. Their wedding became more delightful when Knowles chose her sister Beyonce to become her bridesmaid.

After staying together for over three years, they got separated on May 21, 2007. From their three years of togetherness, they gave birth to one son. While getting married Smith was 19 years old and Solange was 17.

Still, after their separation, Solange in an interview with Essence magazine told that they are co-parenting their son together.

Not only Smith, but Knowles also moved on in her life and dated American music director, Alan Ferguson. The pair tied their knot on November 16, 2014.

Still Good Relationship With His Wife Solange & Her Family

Although the pair Smith and Knowles are not together, they are still the best friend that anyone would ask for. On October 2, 2016, Smith posted a picture of Knowles mentioning her as his best friend. He then congratulated her, on her new album F.U.B.U and said it's his best album so far.

Not only with Knowles, but Smith has also maintained a good relationship with Beyonce and Jay Z. Smith along with his child and fiancee goes to Beyonce's concerts and enjoys her singing.

Smith has a half-sibling Cuttino Mobley, an American retired professional basketball player who played from 1998 to 2008 in the NBA. The two half-siblings are very close to each other.

As for Smith's social media presence, he is active on Instagram with over 11.6k followers and goes by the username "danieljsmith713".