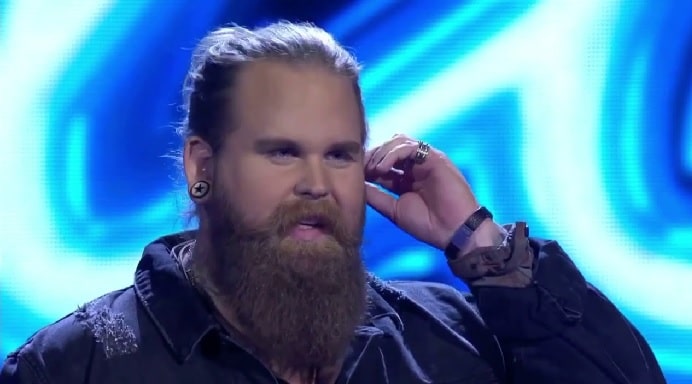 Christoffer Klafford who is professionally known as Chris Kläfford is a Swedish singer and guitarist. He is widely known for his songs, Imagine, Something Like Me, Wicked Game, and Tendering Water.
Klafford was born on born 10 April 1989, in Ramsberg, Sweden. He rose to fame after winning Swedish Idol. Here are some facts about Chris Kläfford:

What is Klafford's net worth?

Chris Klafford has an estimated net worth of $2 million from his solo career as a singer. He has earned his net worth from being a pop singer and from doing various shows and tours.

Klafford is in a relationship with Bob Linger, who is a Swedish photographer and editor. They started their relationship in 2013, and are together for over six years. Bob and Chris often post each other pictures on Instagram. Chris has recently dedicated a son to Bob, he has posted their picture on Instagram while he has written the lyrics of the song in the post.

The Swedish Idol winner has two younger brothers, Jonathan Sjögren who is a photographer, filmmaker, and the owner of brothersbrothersproduction where he shoots his brother music video, wedding, and short movies.

After appearing on America's Got Talent (AGT), he was often compared to Thor from End Game because of his long hair and bold personality. His girlfriend Bob also edited one of his pictures where she has replaced Thor's hammer with Chris's guitar. He posted the edited picture by captioning “So… you figured it out did you?!”

Chris Kläfford is the winner of Swedish Idol which is Sweden's version of American Idol in 2017. He won the thirteenth season of the show.

He also participated in American's Got Talent (AGT) where he sang John Lennon’s “Imagine” song in the audition which left all the judges in tears. Judge Julianne Hough told him that she felt her heat and passion while Simon Cowell praised him for bringing his own swag on the song.

Unfortunately, he didn't win the contestant and was eliminated from the semifinals.

Wrote a Song From His Personal Experience

While participating in AGT he performed his original song names "Something Like Me" which he wrote from his own personal experience where he used to get judged by his appearance by many people.

Klafford is a successful and famous singer now, however, at the beginning of his career he used to struggle a lot. He spent his ten years performing in small bars.

Most Successful Contestant Among Swedish Idol

Chris has released five singles in a year from which his three singles were on national radio. His singles were sold platinum while was streamed 35 million times. His two single was the most streamed single which was at #1 and #7 position the same time. One of his iconic performances was John Lennon’s Imagine which is on the list most viewed on YouTube.