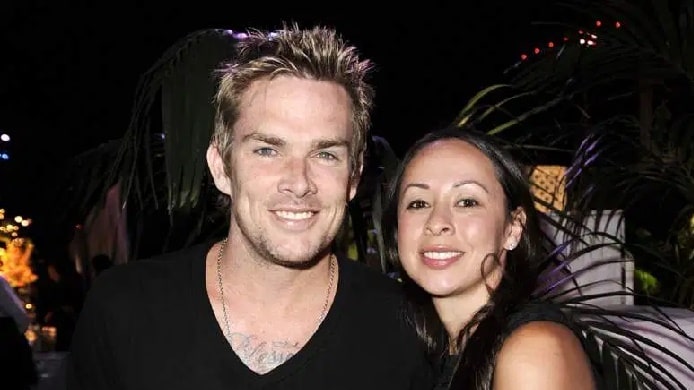 Carin Kingsland is an American beautician, housewife and television personality. She rose to fame after marrying the lead vocalist of the rock band Sugar Ray, Mark McGrath.

She was born on 11 October 1973, in Rancho Cucamonga, the United States. She has made her appearance in Celebrity Wife Swap and Celebrity Big Brother. Here are some Facts about Carin Kingsland:

Carin Kingsland has an estimated net worth of $6 million which she earned from being a professional beautician.

Beautician Kingsland is married to an American Singer Mark McGrath who is mostly known for his hosting many shows like Celebrity Big Brother, Extra, Don't Forget The Lyrics and many more.

The couple met in at The Viper Room in 1994, which is the venue owned by the Hollywood actor, Johnny Depp. Their relationship was going on and off for over sixteen years and finally, they got engaged in 2009. After one year, in 2010, they tied their knot and now the pair are living their happy life with their twin children.

In 2010, the year they got married, both couples listed their house for $1,199,000 which was located in Los Angeles, California. The house included two bathrooms, three bedrooms, a swimming pool which was filled with well-furnished rooms and luxurious items. Both couples used to enjoy their newly married life in their previous house.

Kingsland gave birth to twins children which is a girl whom they named Hartley Grace McGrath and a boy named Lydon Edward McGrath. They were born in 2010 and are now nine years old.

Got Pregnant Through IVF

Carlin and Mark gave birth to the twin Hartley and Lydon when Carin was 36 and McGrath was 41 years old. But in their case, there was not an age problem the problem was with both Carin and McGrath. When McGrath was ten years old, one of his balls got injured and it was then the doctor told him he can never have children.

Meanwhile, when Carin was eleven years old her one ovaries were removed as well as she faced many complications with cysts and fibroids.

Kingsland and McGrath both are animal lovers. They own a Pomeranian breed dog whom they name Poppy and have done insurance of their Poppy.