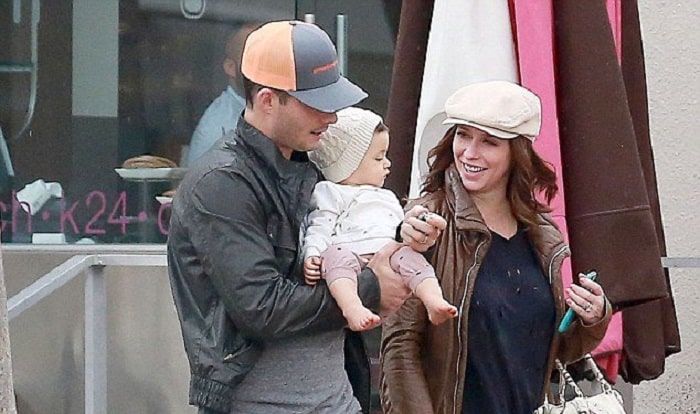 Autumn James Hallisay is the celebrity baby of Jennifer Love Hewitt and Brian Hallisay. Autumn was born on 26th November 2013.

The name "Autumn" means 'the transitional season from summer to winter'.

The name "James" is of a Hebrew origin and in the language means "The "Supplanter".

Autum James Hallisay's father, Brian Hallisay has the total net worth of $2 million. He managed to accumulate his riches through being an actor and getting roles in movies like "Strong Medicine", "Without a Trace", "The Inside", "Cold Case", "Bottom Ups" and many more.

Autumn's mother, Jennifer Love Hewitt's net worth totals up to be $18 million. She is also an actress like her husband and earns her living from being on the screen.

Hewitt has been a part of many movies and television shows like "Munchies", "9-1-1", "Criminal Minds", "Heartbreakers",  "I Know What You Did Last Summer", "The Ghost Whisperer" and many more. Jennifer is also a singer and has enjoyed the fair share of fame from being a great vocalist.

Jennifer's song "How Do I Deal" got very popular and also made it to the Billboard's top 100 in number 59.

After announcing the birth of their daughter Autumn James Hallisay, the secret about the two discreetly tying the knot also came forward.

The two got engaged while they were vacationing on Europe. After announcing the engagement, the two shortly announced that Jennifer was pregnant with Autumn and was in her third month of the hectic cycle.

Jennifer also had previously talked about how she thinks she will be a good wife and how she loves to give out her love to someone and there is someone great waiting for her. Lucky for her, the great person is Autumn's daddy Brian Hallisay.

Autumn has one baby brother and his name is Atticus James Hallisay. The two has the same middle name and it is very adorable.

Autumn's baby brother was born on 24th June 2015. According to her parents', the two are very close to each others and Autumn loves Atticus a lot and always looks forward to play with her little sibling.

Jennifer shared a very cute and funny story about Autumn imitating her. Autumn would apparently go around the house and say "911, mmhm, what is your problem?" in her fake phone making everyone around her lose their minds laughing. Jennifer has a good laugh seeing her daughter imitate herself and has often told her that it was too much attitude for an emergency situation.

Autumn James Hallisay is already being pampered and is her mommy's best friend and a go to girl. The two girls were spotted shopping together and even though Autumn is only 5, she was taken to Jennifer's shopping spree which she probably enjoyed a lot.

Autumn's mother, Jennifer Hewitt has been on the spotlight for her face and body changes throughout her years on the screen. Even though Jennifer has straight up denied going under the knife, she is still accused of getting plastic surgery.